I was not expecting much from my surroundings, but Mvura Nkuvure has provided more than expected 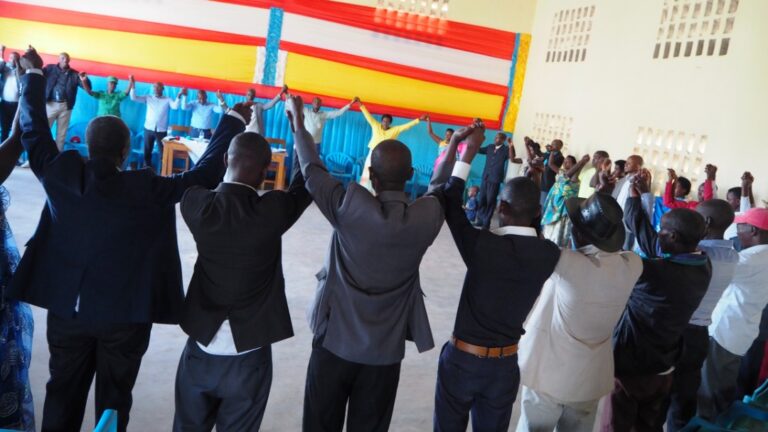 I was not expecting much from my surroundings, but Mvura Nkuvure has provided more than expected

After driving for one hour, from Rubengera, through the mountains of Karongi on the shaky cobblestone road, we reached Murambi sector where sociotherapists and 14 sociotherapy participants had invited us to join their conviviality meeting.

Conviviality meetings are normally organized at the end of every round of Mvura Nkuvure at community level, as an event marking the official closure of the 15 sociotherapy sessions. It is considered to be a grassroots platform that gives participants the opportunity to tell their stories and their experiences gained through the interaction in the sociotherapy group. It is also a celebration, as the participants do not only share stories but they also share some food and sing and dance together.

Sociotherapists from Murambi sector presided over conviviality meeting that brought together 14 sociotherapy group members who had been attending Mvura Nkuvure sessions for 15 weeks. The group members who concluded this round were recruited in May 2019 and selected – in close collaboration with local leaders – from genocide survivors and perpetrators in Mubuga cell.

This conviviality meeting was attended by sociotherapy graduates, their family members and local leaders. During the meeting, the graduates expressed their feelings vis-à-vis their experience and what they have gained from Mvura Nkuvure. The testimonies were touching and revealed that the participants experienced a different life after attending the group than before attending Mvura Nkuvure. One testimony in particular was highlighting that the group led to behavioral change.

This was not only mentioned by sociotherapy graduates but also their family members witnessed that the life before joining Mvura Nkuvure program is different from the life they are living after attending this program.

“…The first thing I could feel before joining this Mvura Nkuvure program, was fear; I was desperate, and hesitant, I didn’t know how I would meet and sit together with the genocide survivors…”

Extract from the testimony of one of the sociotherapy graduates – a genocide perpetrator – who confessed his involvement in the 1994 Tutsi Genocide, and served his sentence doing the community work, popularly known as TIG (travel d’interest generale).. During the time he spent out of his home, serving his sentence, he could receive communications informing him that his wife had another husband. This made his life miserably bitter all through the reintegration process after completing his sentence

“That was the most terrible experience I ever had in my life” he said, adding that he used to feel insecure in his own family and even in the rest of his community members whom he had wronged.

“I was in the most horrible situation that no one could understand or find a way out. I was not expecting my extended family to help me out, neither competent institutions nor local authorities. I was in a complete isolation, […] until I got a chance to participate in Mvura Nkuvure”. He mentioned that the sociotherapy phases of “Safety” and “New life orientation” helped him to understand that interacting with a person that one maltreated, can help to reduce fear to ask for forgiveness and at the same time paves way for possible feelings of forgiveness. “[….] certainly Mvura Nkuvure has provided me with moral and social support more than expected that no one else would be able to do from my neighborhood… I’m now satisfied with peaceful and positive mind and my wife is the eyewitness” he concluded.

According to the local aleaders of Murambi sector, Mvura Nkuvure is contributing a lot in promoting unity and reconciliation at community level. It is expected that the sociotherapy graduates in Murambi sector will support the execution of Ndi Umunyarwanda/Imihigo relatedactivities effectively. And in addition to that, the sector leaders expect to close the pending 80 Gacaca cases thanks to the support of these sociotherapy graduates. Murambi, in this event, sector was represented by the chairman of executive committee and the Civil Registrar.

“You are not concluding, you are rather starting… this is the begging of unity and reconcilitation journey” said by Emmanuel NIYIBIZI, the Murambi Civil Registrar, emphasing the role that Mvura Nkuvure plays in sustaining social cohesion in Murambi; he further added that the sociotherapy graduates are going to be the promotersof unity, reconciliation and sustainable peace which will benefit 23,227 citizens of this sector. The graduates will be meeting on regular basis with the sector leaders to plan and coordinate related activities.