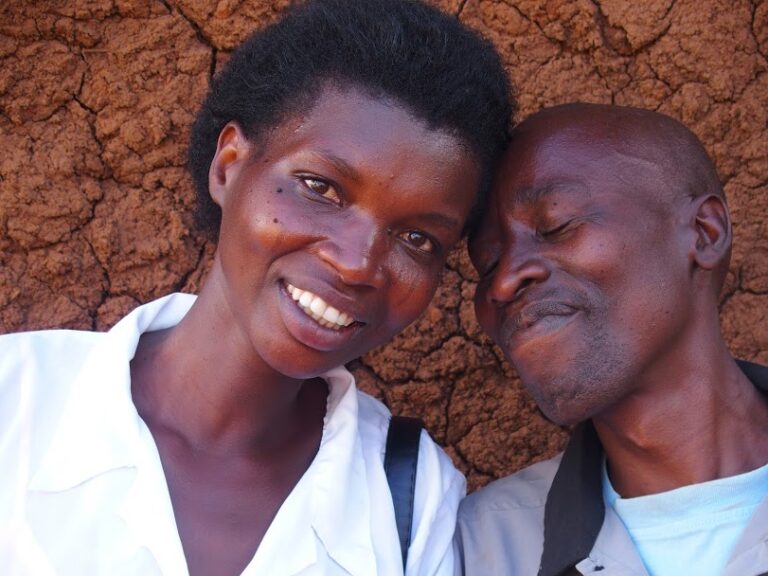 My name is Elina. I am a widow and mother of 3 children. I was born in 1977 in Gatsibo district, but I grew up in Rulindo district with my mother.

I remember one particular Thursday in April 1994. My mother woke up early to go to Kigali to sell vegetables. However, this time she could not reach Kigali as the genocide had already started. She returned, only reaching home in the evening hours. There had been many barriers on the main road, which forced her to travel through different rural paths.

That same evening houses were burnt. When the Interahamwe entered our village a couple of days later, we fled our home. In that disorder I lost my family and only remained with my cousin. We hid in a sorghum plantation near our house, but my cousin was killed the following day. After three days of hiding, I got hungry and went to beg for food at a house nearby. The woman gave me something to eat, but told me to go away as her sons could kill me. A few minutes later her sons entered the house. I ran away, but they managed to catch me. They did not kill me directly, but hid me in a house that was under construction. The older of the two regularly brought me food. Three days later he was accompanied by a couple of men. After I finished eating, they raped me. Next, some of them beat me and others pressed their fingernails in my face and in my genitals. They left me there to die. When I regained my consciousness, I could not stand up nor walk. I crept around like a snake. A man that found me after four days gave me water, a sweet potato, and some traditional medicines. Still, I was in much pain. I was also very depressed. I exposed myself to the killers in the hope that they would kill me, but they did not.

I decided to go back to my house, only to find it destroyed. From then on, I spent a long time hiding in sorghum plantations, begging for food, and regularly fleeing to different places. When the war started in Shyorongi, I went out of hiding to see what was going on. I met a man who hid me in his house, but who forbid me to expose myself to the outside world. As I was still threatened with death several times, I decided to flee to Congo. The way was very long, miserable and tiring, and I faced hunger, sickness and rain. When I finally arrived in Mugunga camp I thought I was safe. However, even in this camp I found myself brutalized by people, who claimed I looked like an inyenzi (cockroach). Some of them tried to kill me, including the chief of the orphanage where I stayed for a couple of months. One day I met my cousin in the camp, and went to live with her and my aunt. I was very happy to finally have found a safe place to stay. However, as we lived in poverty we decided to return to my aunt’s house in Kigali.

In Kigali I soon enrolled in school. After a while I married with my neighbor. I never shared my life experience with him, because I did not know how. In 2004 my husband was diagnosed with tuberculosis and HIV/AIDS. He died a few days later. I myself also turned out to be HIV/AIDS positive. It was then that I realized that one of the men who had raped me in 1994 was HIV/AIDS positive; I had retrieved that information when I was collecting information for the Gacaca courts. Knowing that I was HIV/AIDS positive was a heavy burden for me, but I continued to struggle with my three children. After a while, the Genocide Survivors Assistance Fund (FARG) informed me they had rebuilt my house in Shyorongi. When I returned there, it turned out that my aunt had sold all the surrounding fields. This made me very poor, isolated, irritated, and deeply angered. I did not have any interest of life anymore.

In this situation, a sociotherapist came to my home to invite me for participation in sociotherapy. As she was my friend I did not hesitate to join her. The first sociotherapy session was useless to me. I did not trust anybody. I was constantly wondering what I would, and would not, share with the other participants. I decided for myself that I would continue participating in the sessions, but only by listening to the others. After building safety and trust however, I shared my life experience with the group. From that day, I felt like a different person. My brain relaxed, and I regained empathy and love for people.

I benefited a lot from sociotherapy. Although I had received psychological support from FARG, it was not enough to heal my wounds. Sociotherapy helped rebuilding my self-esteem. It improved the way I took care of myself as a person who is HIV/AIDS positive. Sociotherapy provided me a space to express emotions and listen to others who faced different distresses. Hearing such heavy stories of others made me realize I am not the only one who suffered. Now I believe that my future will be bright because I have many true friends around, my children are growing up and I do not feel ashamed anymore of being HIV/AIDS positive. I am thankful of this program because it changed my life. It gave me friends who support me and take care of me when I get physically weak. I do not fear the future anymore.